With the hint of cooler weather that the month of October brings to south Louisiana, I long to get down to the marsh to stalk my favorite prey, the red drum (redfish). Because of my active performing and teaching schedules, I have not been able to take advantage of the recent cool spell that we’ve been treated to. That all changed for me this Sunday afternoon when I was  presented with an opportunity to make an afternoon trip down Highway 1, an area that I’ve fished since I was a boy. I still have memories of bank fishing with my five siblings, my parents, and my grandfather as a kid. I happened to catch this little fish on my fly rod during yesterday’s trip and it had me reminiscing about one of my early fishing trips.

I was a young teenager and I thought I had this “fishing thing” down. My grandfather, Pawpaw, as we called him, was a bass fisherman, a hunter, an animal trainer, (hunting dogs and horses) and an avid outdoorsman. We loved to fish with him and hear him tell us fish stories from a time long ago. Paw Paw used to fish with these Crème plastic worms completely rigged from the manufacturer with hooks already in them.

This one trip had us bank fishing the marsh down Highway 1 and we “know-it-all” teenagers were having some limited success with market shrimp on a tandem shad rig under a popping cork. We tried to get my grandfather to switch from fishing with the crème worm and put on some bait and a popping cork, but he just smiled, gave us a wink, and kept on chunking his worm out to the bay and would reel in it like he was fishing for bass.  Lesson number one from Pawpaw, be persistent! Lesson number two, don’t be swayed by peer pressure! I don’t remember how long it took him, but before long he was catching big trout on that plastic worm. I still recall him catching a MONSTER trout that day that was larger than any speckled trout I had ever seen up until that point. I just knew that earthworms weren’t on the redfish and trout’s dining menu.

Well I now know that the worm imitated another food source for the saltwater species we were after, most probably a needlefish or some other type of baitfish. Yesterday’s needlefish reminded me of that and that fishing trip from so very long ago. I think I’m going to experiment and come up with some kind of needlefish pattern. Oh, there’s one more important lesson that I learned from my grandfather and it’s probably the most important thing I learned from him.  The entire time he spent fishing with us, he wasn’t necessarily trying to catch fish. He was trying to catch us. That, my friends he did very well. So, Pawpaw, this fish is for you (even though I caught it on a gold spoon fly and not your favorite crème worm) I love you and know that one day we will be united together again when I can share some of MY fish stories with you! 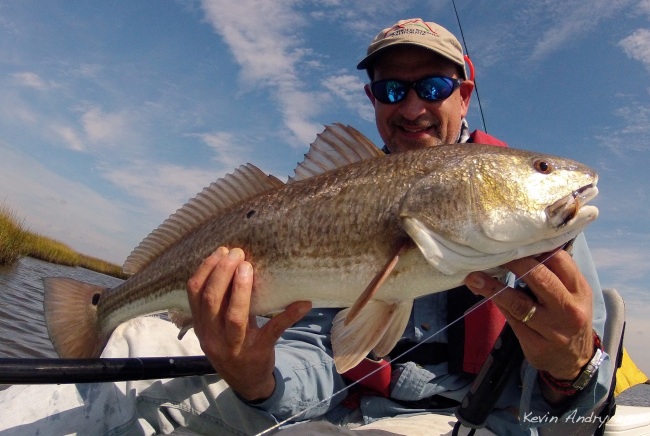