Now that school is out, I’ve been getting more opportunities to fish in-between “honey-dos” and other chores. That means quick hour-and-a-half jaunts out to the neighborhood lakes either by foot or by kayak. If I get out very early, I can usually find some bass willing to eat a fly. By early I mean 5:45 – 6:30. After 6:30, they get lockjaw but I can usually get a few bream to play.

I did make a cool trip with my friend, Glen “Catch” Cormier last week on up to Lake Cotille and Toledo Bend, via Pirates’ Cove. We brought only the fly rods. The bream bite was pretty good, but like I told Catch, if I don’t see another 3-inch bream for a long time, it won’t be long enough! I did manage to catch 6 bass and get an entry in the Massey’s Tournament at 13.5 inches. 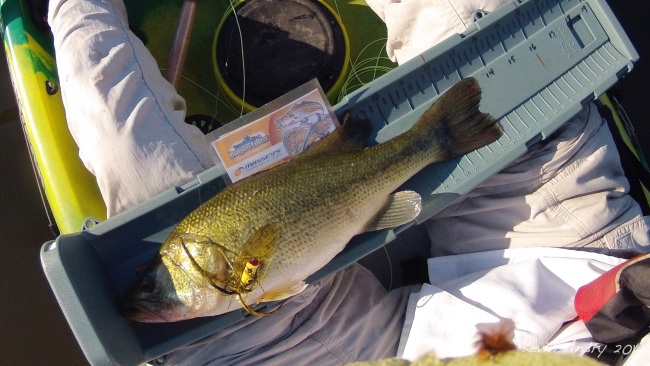 It’s nothing compared to the 18-inch bass I’ve been catching in my neighborhood lake but those aren’t eligible for this tournament.  I have been using shad flies on the neighborhood lakes early in the morning with some success. As for the bream, small poppers and a hare’s ear nymph have been the ticket. I tried my hand at tying the Cormier version of the hair’s ear and came up with three very ugly flies. I had a concert to play at White Oak Plantation today and I threw my hare’s ear at some bream today between my rehearsal the the performance. The baby bream were very willing to play as I caught and released around 25 small bluegill. I couldn’t believe the fish were eating my UGLY fly. I really need to post a picture here but I’m telling you it’s embarrassing. Sorry I didn’t take any pictures. I’m hoping to try my hare’s ear on some bigger bream in our neighborhood lakes. I’ll try to post some pics up when that happens.

advice and news on fly tying and fly fishing