Now that school is out, I’ve finally had a chance to get down to the Louisiana coast. I joined my good friend and colleague, Neil Borel down at his camper trailer in Grand Isle for a couple of days. As my luck would have it, the wind was blowing 10-15 for the first two days I was there.

Day 1: I went my own way and fished an area where I knew there would be grass to filter the dirty, wind-blown water. I wasn’t disappointed in the amount of redfish I saw. They were smashing baby shrimp in thick grass. The only problem was, I couldn’t get a weedless fly in that grass. The score for the morning was redfish 4, Doc 1. I did catch a nice redfish on my trusty gold spoon fly but I had two others break my line on my bait caster and I lost two more on flies. It seemed like a comedy of errors as I decided to run a ribbet frog across the weeds. I can’t tell you the last time I used my bait caster and that was the problem. The line on it was probably a couple of years old. The first redfish that inhaled my frog popped the line at the tie in point. Later that morning, I had one break off with about 20 yards of line. I tried to grab the line in the water but wasn’t successful.

Day 2: I fished with Neil and even bought some live shrimp (Neil’s favorite way to fish for specs). I didn’t catch a single trout all morning. The water was very dirty and I only managed a couple of hard-head catfish. I did pole around for some redfish and saw some big bull drum that were tailing over some oyster beds but they weren’t interested in any I was chunking.

Day 3: The wind finally died down. We were hoping to be able to fish the gulf side of the island but it was still too windy so we opted for the back of the island. I caught my first speckled trout of 2015…on live shrimp. I ended up with 5 keeper trout and Neil caught 8 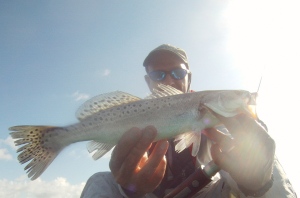 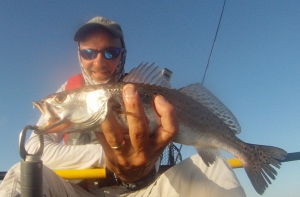 I had fun and was able to catch enough fish for a couple of meals.