I haven’t been fishing in a while; mostly because of home commitments and a back issue that has been very painful. I got a short-term fix on the back and most of my “honey dos” taken care of so I’ll traveling to CENLA to try to catch my buddy, Catch Cormier’s, big bass he entered already on the Massey’s Fish Pics Tournament. I also hope to catch some sacalait and big chinquapin for a Friday Lenten meal soon too.

In the meantime, I’ve found some time to sneak away to my tying vise and I’ve developed my version of a frog popper that I learned from master tier, Bill Laminack. I also learned a new way of putting a weed guard on my popper that’s frankly, ingenious. Again, kudos to Bill.

First, are a couple pictures of the frog popper/slider: 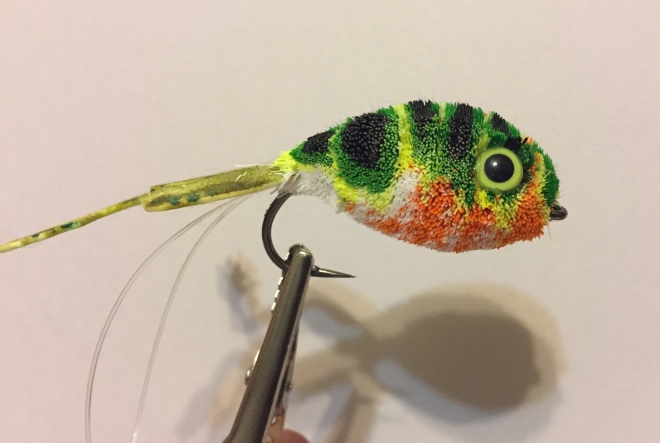 Notice the hard mono on the back side. It fits well into any fly box because the mono is behind the fly. When I’m ready to tie it on my tippet, I just run my tippet through the weed guard and tie off through the hook eye. I used some backing in the following picture so you could see how I do it.

Her’s a view from up front. I can’t wait to see some bass gulp this thing up. I should be able to bounce it over cover too with that weed guard.