It seems we have all kinds of therapies available to us today. Of course there’s physical therapy, music therapy, occupational therapy, and a host of others we won’t mention here. Today’s post is brought to you by the bass therapy. That’s the kind of therapy I needed today. I got a good report from some of my band parents after our spring concert last night and I decided to load the kayak on my truck for a couple hours of bass therapy. That is, a couple of hours of peaceful solitude on a quiet lake with hungry bass that eat what I’m tying.

Well, at least, that was the plan. I got to the lake a little after 5 PM and was throwing one of my deer hair poppers shortly thereafter. I got to one of my favorite spots in the back of the lake and I missed a monster strike by one of those hungry, post-spawn girls. She made one good jump and threw my popper. That’s OK. Being a fly fisherman, I get used to missed fish. Anyway, I was just really starting to relax when three vehicles approached on a dirt road and five young 20-something-year-olds got out and started setting up to do some target practice. They were very nice about it and told me things were going to get loud. I had plenty fishable water so I didn’t mind but the constant shooting did get annoying.

So I paddled away from the shooting and caught my first bass of the afternoon on a fire tiger deer hair pattern. 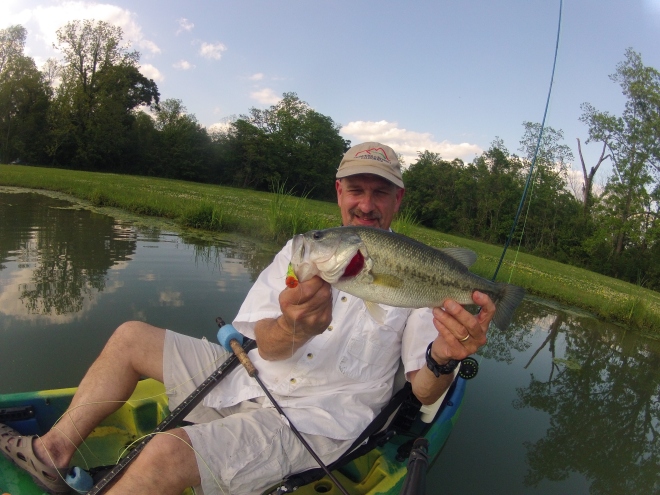 Things were really getting slow when I noticed a nice bass that nosed on up to the popper but refused to eat it. I had a crease fly tied on to my other rod so I tried seeing if it would eat that. Still no bite. At this point, my bass therapy was going to need more therapy.

I paddled to the opposite end of where the shooting was taking place and around 6:45, someone turned the switch on. I proceeded to nearly be able to call my shots. The bass were taking some explosive shots at my crease fly and boy was that fun. Each one seemed to be right around the 15 inch mark with a couple that pushed 16. I tried to switch back to the deer hair popper, but they only wanted the crease fly. I finished the afternoon off around 7:30 with my largest bass of the day, one that pushed just a little over 18 inches and probably weighed over three pounds.  I wish I had gotten a good photo but my GoPro is acting up and I was only able to get a few pictures off the sim card. None of my video came out 😦 and I thought I had gotten some really good video of some good eats. I’ll keep working on the card and hopefully I can extract some of that video.

In conclusion, the bass therapy did the trick. I ended up catching and releasing a dozen bass and probably lost just as many. The action was fast for about an hour, as the fish were feisty and fought hard. Here are a few pictures that I was able to get off my GoPro. 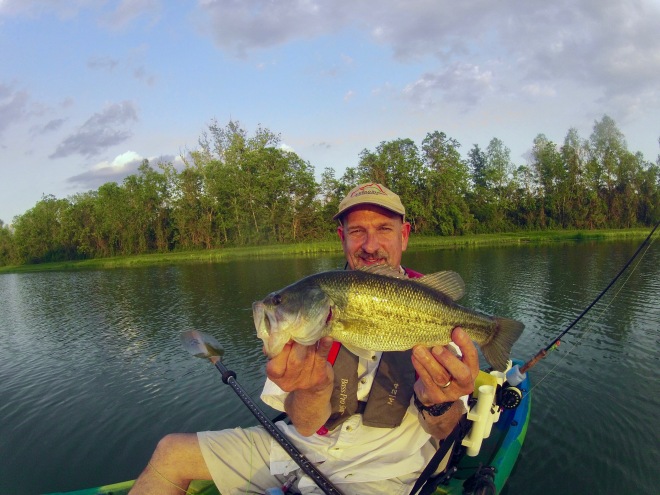 This is my last freshwater trip before my Mission Six Tournament this weekend. Catch Cormier and I look to defend our title from our big win last year. The trash talk has been going on for quite some time. Now it’s time to get out there and catch a couple big slot redfish. I plan on posting a good report here early next week.