Ribbit…ribbit…ribbit…sploosh!!!! That’s how my morning went 🙂 You see, now that school is almost over, I’m going to make up for lost time and get on the water as often as I can. Trips around the house are perfect for 1) therapy and 2) researching new patterns for my flies. This morning, I decided to make a quick trip (they have to be quick in this extreme heat) to a favorite man-made lake that I frequent.

I actually started at sunrise with my tried-and-true, crease fly simply because it was still tied on my fly rod. I got an amazing explosion by one bass that went airborne, only to have completely miss it. Then I got a huge swirl by another that didn’t eat it. That’s all I needed to switch flies to one of my deer-hair poppers. I decided to start with a frog imitation very similar to this one: 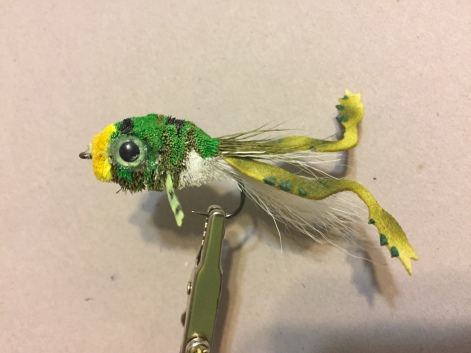 It’s tied on a #2 B10S stinger hook and uses Pat Cohen’s legs. Lately, I’ve been having good luck with my deer hair poppers. For some reason, I get better hookups. You might recall this bruiser I caught earlier this year. They don’t just smash it! They eat it!

Anyway, it didn’t take very long to get my first hookup with that frog pattern. I actually brought my digital scale this morning and this one weighed 2.84 lbs. 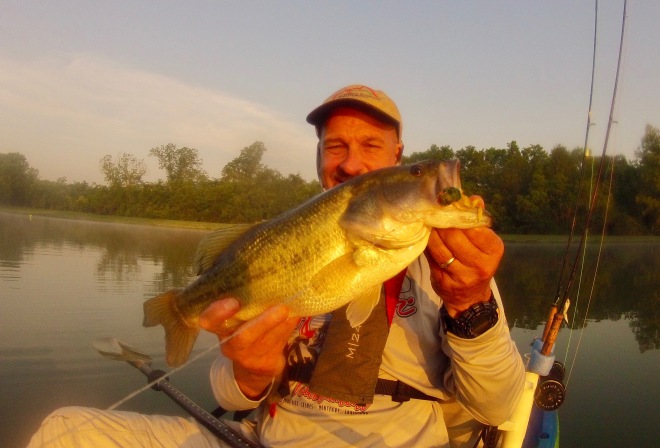 Like I mentioned earlier. They don’t just smash it. They eat it. Notice how far down its mouth that fly is.

So, for the next hour or so, I kept catching fish. Yes. I did loose a bunch and I even had one break my tippet. So I tied on another fish catching color, similar to this one:

and proceeded to land a few more. 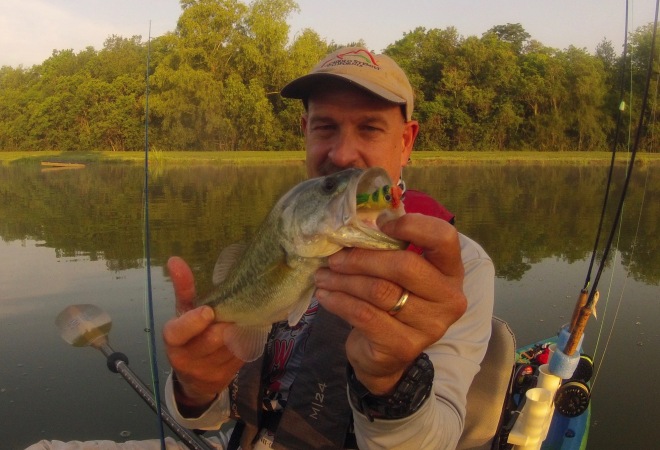 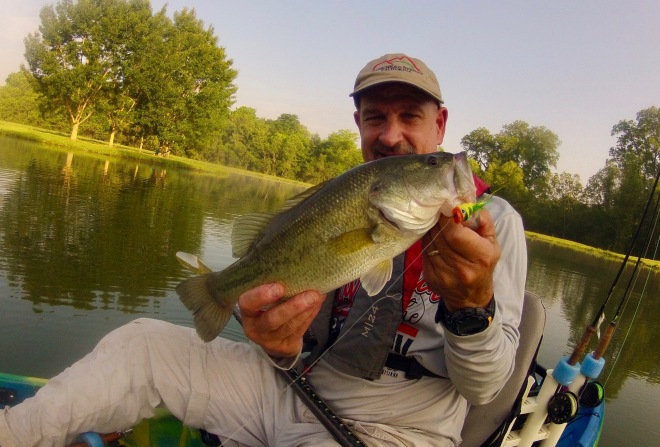 I ended up catching 6 on deer hair poppers. A little after 8 AM, the top water bite completely shut down, so I switched to one of my shad flies and went subsurface for them. I was only able to catch one on the shad fly.

But it was a nice one. I finished the morning around 9:30 with seven that I had landed and at least as many missed fish. Of the seven I landed, only two were under 15 inches and most were around the 2.25 lb range.

So, I accomplished both of my objectives for the morning. 1) I got some great bass therapy and 2) I was able to do some field research on some of my flies! What a great morning!!