After a long weary couple of weeks of work, I was looking for a morning to relax and unwind. A trip to my favorite bass pond/lake was just “what the doctor ordered.”  The last couple of trips I’ve made there proved to be touch catching. The water temperature was pushing 87 degrees and the big bass were quite lethargic. However, I’ve noticed a steady drop in the water temperature in the pool at my house and I figured the same was happening to the local water too.

I arrived at my launch spot and took a water temperature reading. Bingo! 81 degrees. The morning was predicted to be overcast all day with a chance of showers later (yes, it actually does rain in Tiger Stadium folks). On my second cast I was hooked up to a sizable fish but I lost it after a short fight. I then proceeded to miss a few more small fish until I hooked a nice 15 inch bass that pulled me around like a redfish. The fight was strong in this fish and I knew that it signaled that the fish were getting stronger and they would be chasing bait.

I continued to work the bank and I started landing a bunch of “school bass” that were between 10 and 12 inches long. I saw the owner later and he told me that they stocked the lake with bluegill this past spring the bass have been gorging themselves on baby bluegill. He actually insists that I keep all fish under 15 inches but I just didn’t feel like cleaning fish today.

I did manage to catch a few more fish over 15 inches but the bulk of the fish were those fun little ones that were slamming bait in the shallows. I used two variations of deer hair poppers, a regular fire tiger pattern and a frog pattern that was still in the fire tiger color scheme. I also tried a crease fly but to be honest, I’ve fallen out of favor with my crease flies. They tend to catch wind and twist my tippet. I find that I loose more fish on them too. I don’t know if it’s because they are so light that a bass will slam them and end up knocking it out of the water. I do know that I end up hooking more bass on deer hair bugs. This next sure made me a believer 🙂

I finally figured the big guys had worked their way into deeper water and I tied on a Coma Cockaho. I began fishing about 10 feet off the bank and I tied into one of the larger fish of the day. 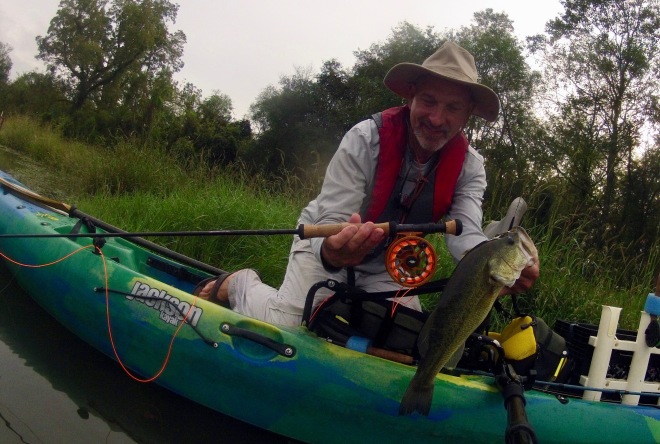 I put together a short (under 4 minutes) video with some the action I enjoyed today. I love seeing bass hit topwater and I was able to capture some of that topwater action. on the video. Enjoy!

3 thoughts on “Bass Therapy (Fall Bass Fishing is Heating Up)”