While catching large bass, bull redfish, and speckled trout are fun, nothing gets me excited as when the crappie (sacalait) start biting down south. These fish are some of the best tasting fish in fresh water and can provide some good fun on a 5 weight fly rod. I heard during this past summer that our neighborhood homeowners association stocked the lakes with bass, bluegill, catfish, and sacalait following our flood of two years ago. I recently caught a random catfish but I hadn’t had any luck with the “sack of milk.” I did catch a couple of small (up to 10 inches) ones early this winter during a scouting trip, just to get on the water. That all changed this week.

We recently welcomed into this world my new grandchild, a grandson, Benson Philip Wijay. I have been so excited and the joy of welcoming him into our family (no I haven’t officially bought him a fly rod just yet) has been the only thing on my mind. That all changed early this week when my daughter (Benson’s mom) was rushed to the hospital with some major postpartum complications. The good news is, my daughter is now home with her children and her health is not in danger. My wife has been in Texas with them and we’ve been communicating via cell phones and texting for the past four days. Now that things have cooled down, I was in need of some some stress relief. 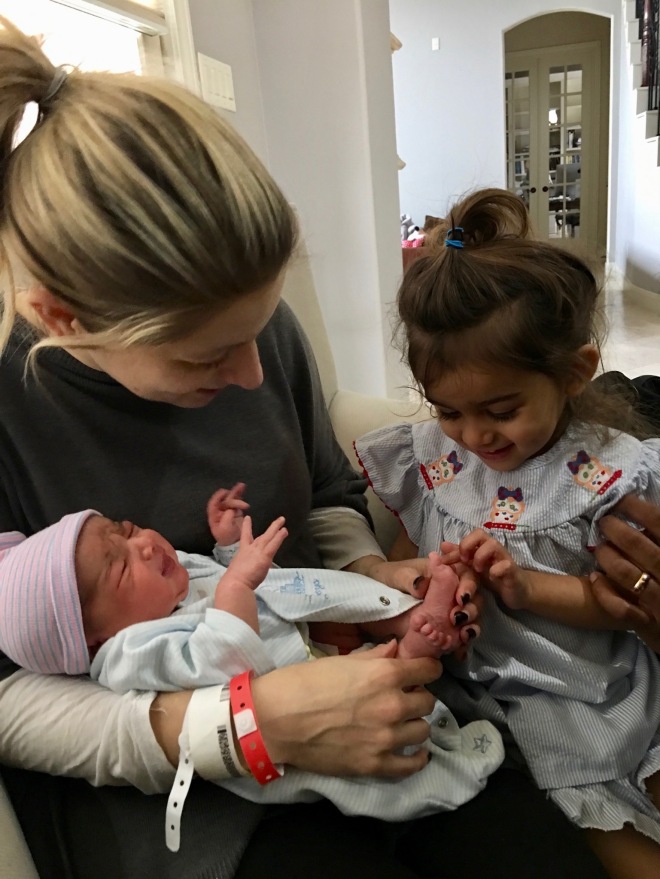 Big sister is counting his toes and checking him for ticks. 🙂

The relief came earlier this week when I was home early (about 4:30) and figured I’ll walk my kayak down to the lake to try a little afternoon fishing. I was armed with one fly rod with an olive fluff butt tied to the end of it. I took a moment (like I usually do) to  make a quick pass around the launch area and clean up some of the trash that the recent winds have knocked into the water. After that, I began hitting the banks, looking for some big bream, sacalait, or anything else that might be fooled by the marabou jig. The fishing started off pretty good when I hooked into a 12 inch bass. Then I fished around a stretch of water that usually holds bass during the summertime. I immediately hooked into what I thought was a big bass. Come to find out, it was a 13.5 inch sacalait! Hold on, now. I usually practice “catch and release” when I fish freshwater, but when I catch big chinquapin or sacalait, I practice catch and release…into a skillet of hot grease :).  A few casts later, and I had another one on. I noticed that these fish didn’t fight like normal crappie. Once hooked, they took off like a missile. They didn’t jump out the water, but they fought ferociously. I ended up having one straighten out an old hook (no kidding) and two break off my 6 lb. tippet. I frantically tied on some stronger tippet and was down to my last olive fluff butt. I finished up my stringer of 7 fish. 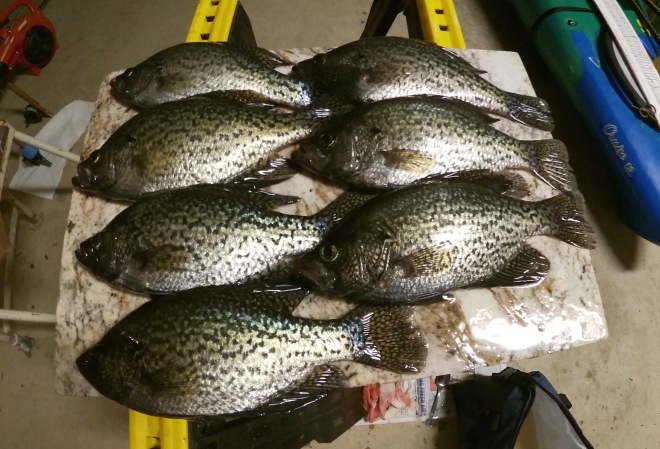 I can’t remember fresh fish tasting so good. I had to fillet them because they were so big and I ended up eating three for supper. The other four will be frozen for a supper in the near future (lent is coming soon).

So I gave the fish a day off and my schedule freed my up two days later. I was in luck because it was the day before a cold front was predicted to hit Baton Rouge. I got out earlier this time and went to the same spot I caught fish earlier in the week. This time, I rigged two rods; one with a black and chartreuse fluff butt and another with an olive fluff butt. I was going to see which one was more productive.

Within the first couple of casts, I was fighting an angry slab of fish, caught on the black and chartreuse fluff butt. 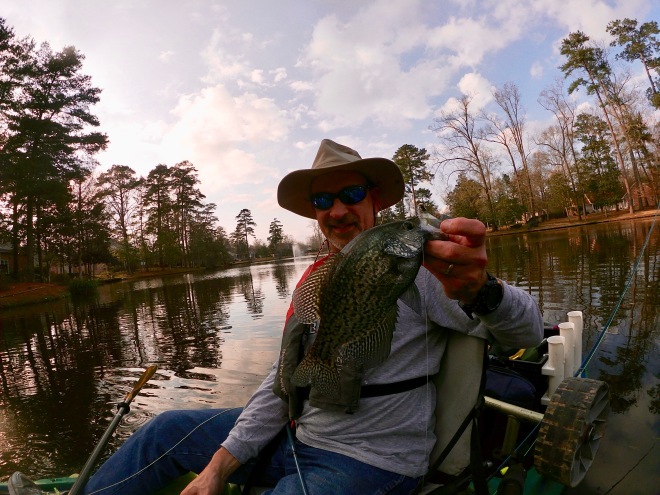 After two of those, I switched to the olive. I caught four quick fish before switching back to the black and chartreuse. By now, the action had slowed and I think I caught one more on the black and chartreuse to bring my total to 7. I left that spot and searched a few other promising areas but didn’t get anything else except a few small bream. I did manage to catch two sizable chinquapin (one touched 10 inches) before heading back with a neighbor to my original spot. He wanted to see me catch one with the fly rod and I promptly caught two more to finish my stringer (those last two were caught on the olive pattern). I left him to fish with a black and chartreuse beetle spin but I don’t think he got any hits. It was starting to get dark and I had fish to clean so I bid him farewell and walked my kayak home. 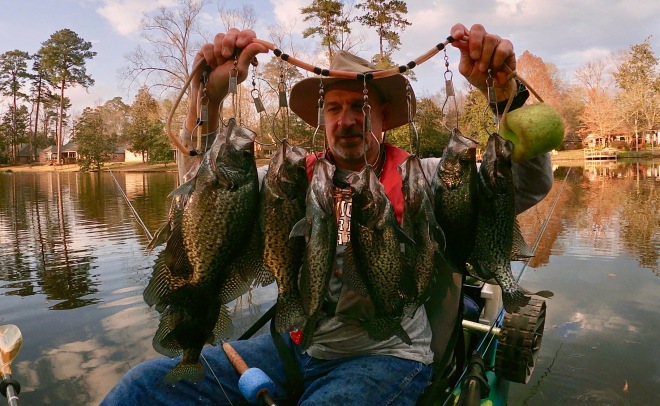 Nine fish were all I felt like cleaning tonight, so I left them biting 🙂

Anyway, the fishing sure was therapeutic and came at a perfect time. I’ll give those fish a rest and try some new water next week. According to local reports, it’s on like gangbusters right now…and the next full moon isn’t for a couple of weeks. Time to get some fish for those Friday Lenten Fish Fries. By the way, I was able to land 6 fish on the olive fly and 3 on the black and chartreuse. I think I need to do a lot more research 🙂

Fly Fishing Adventures Based Out of Louisiana

Jsflyfishing
The way of the /:Fly:/