I know I haven’t posted here in a while and it’s really not that I haven’t been fishing, because I try to slip my kayak in my neighborhood lake at least once a week. I just haven’t had much to write about. I might catch one bass here or there…or

one 10 inch bream (red-ear or called chinquapin down here)

I even made a trip to one of my friend’s “old reliable” lakes to catch some bass on poppers but I lost three and only managed to land one healthy bass.

Yesterday, we received word that in and attempt to stem the growing tide of the COVID-19 virus, we will be teaching school for the next few weeks online. In addition to that, I had to cancel our high school’s band trip to Disney World, and I had to move my band’s big fundraiser from March 29 to May. I had been in meetings with band parents, meetings with administrators at school, and I had been on the phone for hours with Disney, charter bus personnel, our hotel in Orlando, and God’s knows who else. Thank God my wife was able to purchase some toilet paper earlier in the week 🙂  To say it’s been a stressful week is an understatement. Don’t get me wrong. I’m not a whiner (maybe a winer 🙂 ) and I know it’s been tough for a lot of people in the world. All I know is, I needed some time alone in a kayak with our Lord and a fly rod in my hand.

I loaded up my kayak in my truck and headed to my “old reliable” lake/pond again. After praying my Glorious Mysteries on the way there, I knew my mind was right and it was going to be a great morning. I think I caught my first bass on like my second cast.

That was a terrific start. I caught about a half dozen on a Frog style deer hair popper before the fish had destroyed my fly.

I probably lost about twice as many before I tied on another popper with a different color combination to change things up. Again, I started missing fish and I began to wonder if my hook gap was wrong or something. I figured those bass were just a little bit small and then I got into an area where my hook ratio really picked up.

Notice the algae in the background. It was a challenge to cast close to that and not get a big clump of salad every now and then.

I kept a count of how many I caught (19). All were caught on poppers. At around 9:45 I started heading back to the truck but I was going to fish the bank on down toward where I had parked. I got to one little change in the algae line and right away I missed a fish. Two casts later…another miss! By now, I’m thinking I need to take lessons on hook setting or something….and that’s when I saw this big girl lift her head out the water to slurp my popper in. I let her go down with it a second before I strip set the hook hard in her mouth. By the way she was pulling, I knew she was the fish of the day. Of course, I started talking to her. “Don’t you dare jump!” “Don’t you dare spit my hook!” Every time she would rise to the top to jump, I would give her a little more line and I was able to keep the fish from jumping. After a few more minutes, I was able to lip this beauty 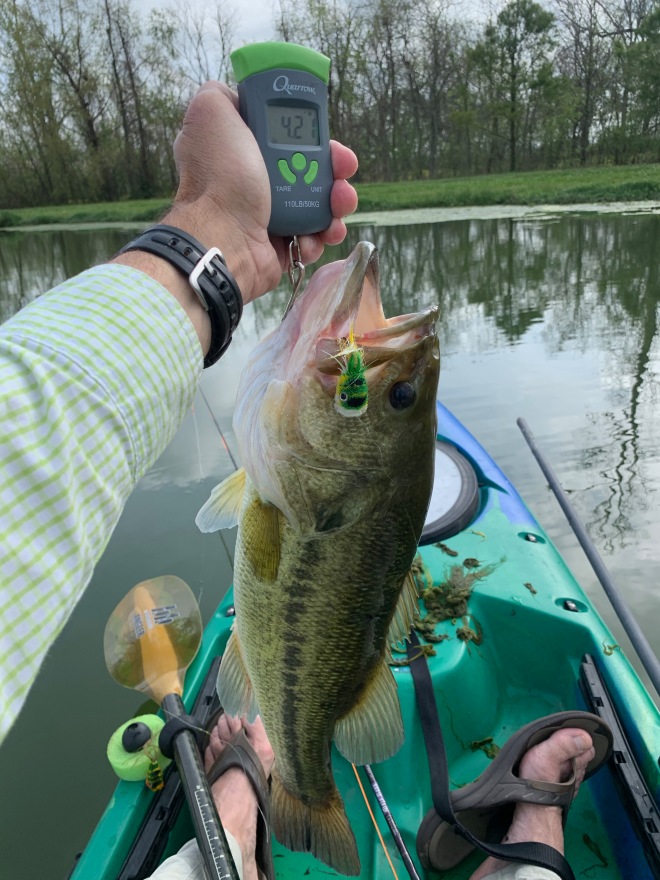 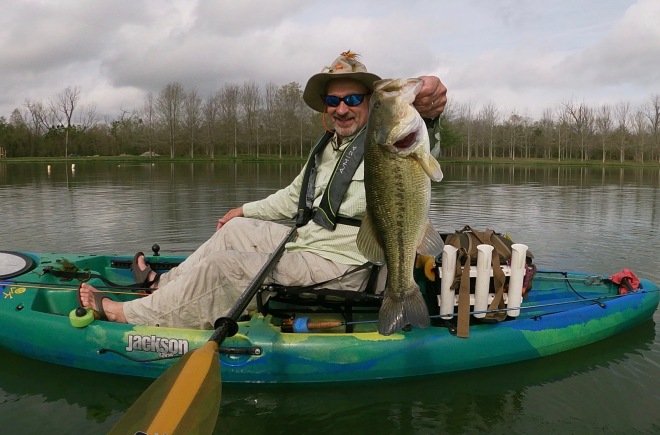 I decided that after that fish, I had had enough for one morning. The owner of the property asked me to keep fish under 15 inches. I have a hard time keeping bass, especially during the spawn but I did keep a dozen under 14 inches to eat on a Lenten Friday soon. In fact, the way people have been clearing the shelves of food, water, toilet paper, etc. that may be the only meat I eat in a long time 🙂

So when I researched ways to avoid the Coronavirus, I keep seeing the phrase, “social distancing.” Well, I did some social distancing and I was able to get some fresh air, some fresh fish, some sun, and some stress relief. I think I’m good for a while. 🙂