Although it isn’t officially spring yet, I’ve been itching to make the 3 hour drive north to my buddy’s house in central Louisiana (CENLA) to do some bass, crappie, bluegill, red-ear sunfish…and whatever else would bite on a fly rod trip. I left Baton Rouge right after school and met Catch at the launch site to fish Lake Valentine. For about an hour-and-a-half, we fished the clear water in the lake and I actually skunked. I was fishing a new frog pattern (see my previous post) and I couldn’t get a bite. Catch, however caught a half dozen or so bass and had this nice one that he caught on a small, dark green popper.

Then next day, we got up early and headed over to the same lake to try the morning bite. I managed a couple of dinks but nothing substantial. Catch had similar luck and by 10:30 or so, we decided to call it a morning, regroup, and try “plan B.” The wind had picked up substantially and the fish just weren’t cooperating. What a difference 12 hours makes! We were treated to some beautify wildlife, including this friendly little guy. 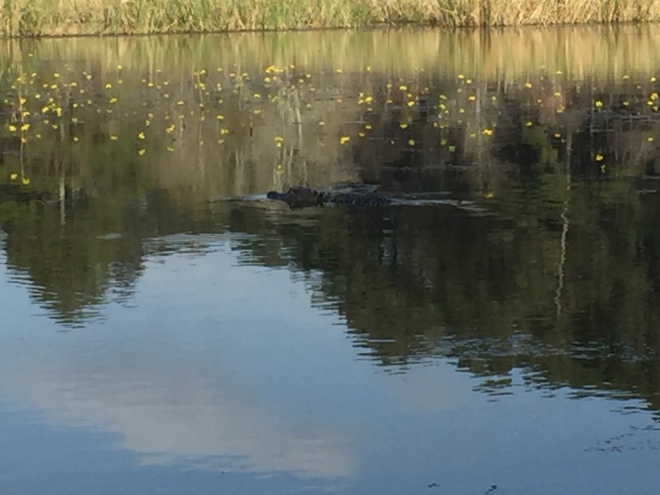 Anyway, plan B was to fish another local lake for some coveted crappie, (also know as sacalait or white perch). I have a friend who’s dad is getting up in age and I promised him some fish for a fry. He loves sacalait too! We probably arrived at Fullerton Lake around 2 PM and fished until sunset. Catch started catching bass right off the bat. I wanted to target sacalait so our strategies differed. He was fishing with poppers while I fished mostly a fluff butt (actually a “silly” butt). I wasn’t having any luck with the sacalait but I did catch two bull bream over 8 inches. I paddled over to Catch to see what he was doing and he said he had caught and released about a dozen small bass. The bass in Fullerton aren’t as big as those in Valentine. Fullerton is loaded with downed trees and logs and makes a perfect habitat for the coveted panfish. We, however, had missed the major spawning period for the crappie and reports hadn’t been that good. I did manage to catch two really nice ones (14 and 15 inches). When I added those to the bream and the one sacalait that Catch caught, we ended up with a nice stringer of 9 bull bream and three sacalait. I caught 4 bass on poppers and Catch caught 21. I was disappointed that I didn’t get any strikes on my deer hair frog. I downsized my popper and that’s when I began to catch some bass. On a side note, I don’t think I can recall ever fishing in a place that had so many BULL FROGS. They were croaking all afternoon. I even saw several in the grass along the banks. I tried to get a picture but I spooked the one that I was able to get close to. Here are a few pictures from the day. 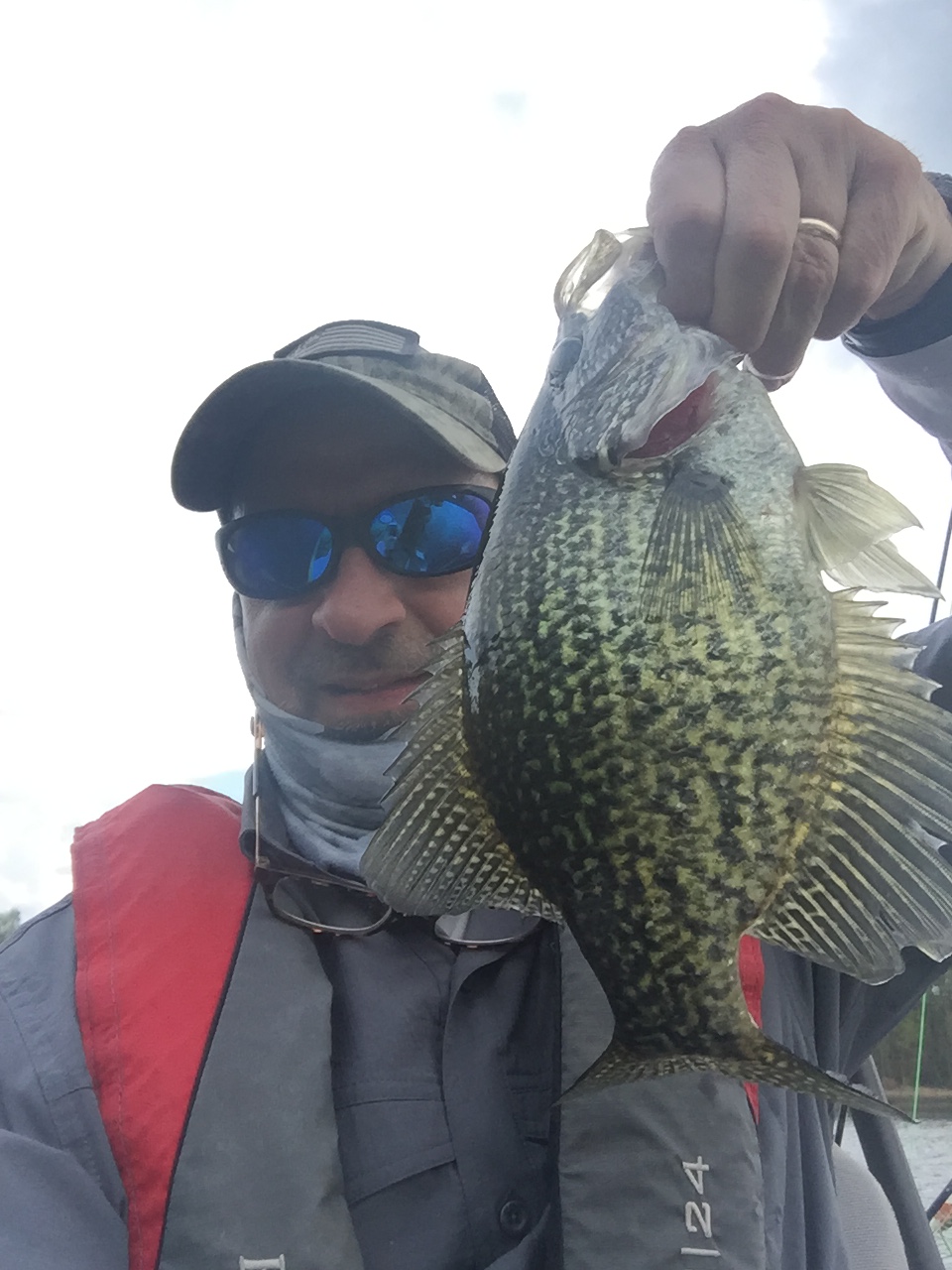 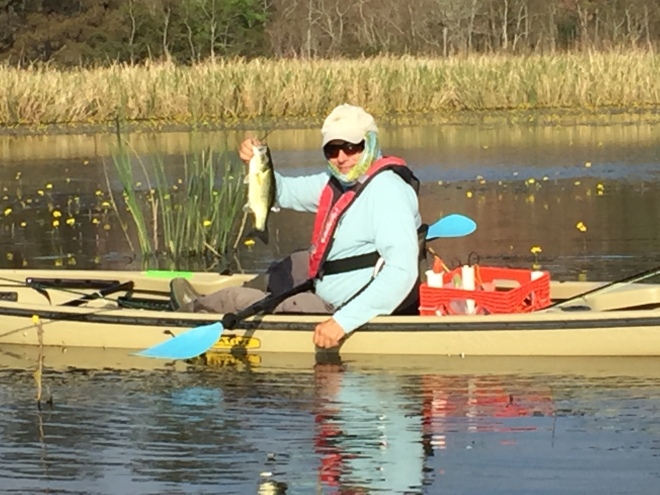 A chunky bass caught on the fly rod in Lake Valentine Saturday morning.

I did manage to get some pictures of Catch casting from his kayak.
Hee is a series of pictures I took. He makes it look effortless. 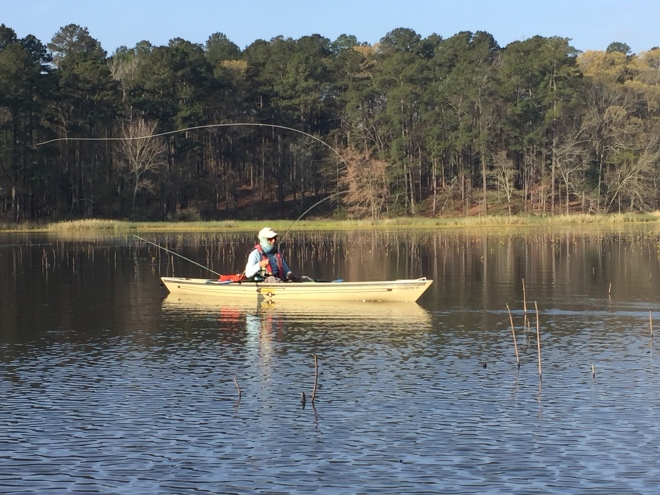 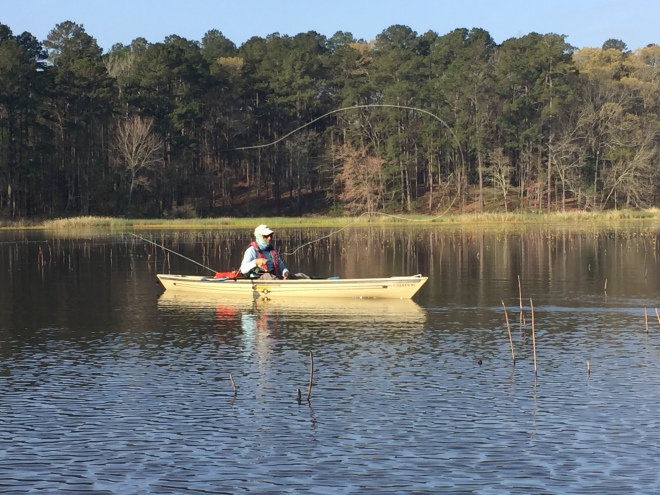 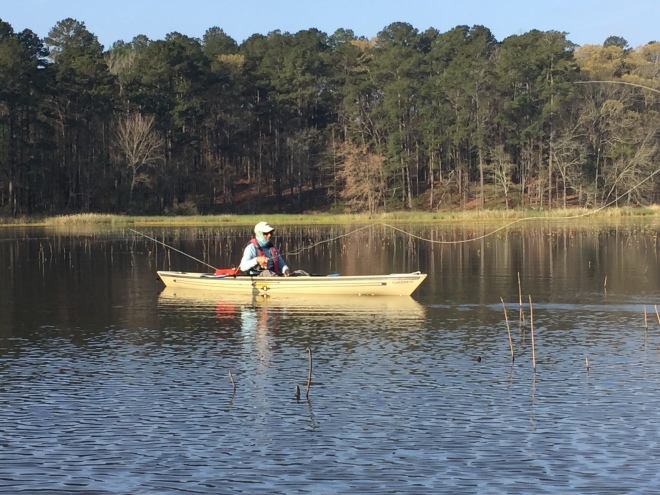 Each year, I make one or two trips to central Louisiana to fish with my buddy, Glen “Catch” Cormier. I met Catch around 13 years ago when he showed up after band practice to pick up his daughter and I noticed two kayaks strapped to the top of his vehicle. I asked him, “What do you plan to do with those?” He replied, “I fish out of them.” I asked “Where?” His reply has stuck with me to this day, “Anywhere I can.” Not long after that, I sold my bay boat and purchased my first kayak. The rest is history.

Anyway, we made plans for me to visit during my Mardi Gras (Fat Tuesday) break from school and do some fishing. First of all, the area where Catch lives now is in the Kisatchie National Forest area, the only National Forest in Louisiana. It is a somewhat hilly area (remember, I’m from flat, swampy South Louisiana) with several great fishing lakes and reservoirs all within a 15-30 minute car ride. So when I drive up there, there are always many options for us to choose from to do our fishing. We planned to do some bass fishing so I could A) test out some of my crease flies on some CENLA bass and B) catch a bass worthy of being entered into Massey’s Catch, Photo, and Release tournament that goes on all year for members of the Bayou Coast Kayak Fishing Club. Monday, know down here as Lundi Gras, we planned to fish Lake Valentine.

My view from the top of the lake.

The morning started off cloudy and very overcast with very little wind. Except for a couple of bank fishermen, we had the whole lake to ourselves all day. I began fishing with my crease fly popper and Catch was using a frog popper. We noticed the water was crystal clear, so we would definitely have to proceed stealthily. My first blowup was exactly that. A huge fish gulped my popper and proceeded to bury itself into the thick vegetation. I ended up with ten pounds of salad and no fish 😦

Meanwhile, Catch started doing his thing. They don’t call him “Catch” for nothing. He promptly started landing some pretty nice bass and he caught one that was 16 and a half inches that was going to bump him up in first place in the CPR tournament.

I promptly hung a pig of a bass, set the hook too hard, and watched in utter frustration as it snapped my tippet.

I was using a large popper (I’m thinking larger fly = larger fish) while Glen was using a tiny frog popper. His choice for poppers was an easy one for a guy who fishes these lakes all year long and knows about the large populations of frogs in the estuary. So, I tied on a small popper. I immediately started catching bream, which was fun, but it was not my target species so I put the crease fly back on. Then I started catching a few fish. I caught a small 8-inch bass, then a 12-inch little chunk of a fish. Then, things stated picking up for me as we found some fish hiding in heavy grass around dormant lotus (huge water lilies). You can see the stickups in the background in this picture.

You can also see in that picture just how calm the wind was. The water was absolutely gorgeous and flat. So you can guess how much racket a big bass can make as it explodes in fury over a bass popper. That’s what happened on my next fish. Right away, I knew I had a quality fish and Glen began paddle over to get some pictures. I landed one heck of a bass (my largest of the year) and it was in public water! Hey, now I have a bass to enter into the CPR tournament.

She was just a tad bit over 16.75 inches and I think (we will have to see pictures of Catch’s fish on the ruler) she will bump him down for the time being 🙂 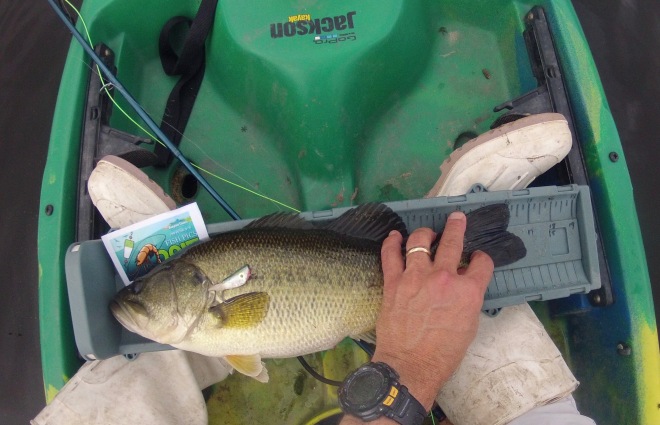 How cool will it be if the first and second place fly-rod bass were caught on the same morning from the same lake? Honestly, there’s a lot more time left until the tournament is over but it’s nice to get a bass entered. Even though I caught over 150 bass last year, I wasn’t able to enter any fish into the tournament because nearly all of them were caught in private water. The one good fish I could have entered I wasn’t able to get a picture of. The good news was, this fat girl was full of eggs and was released to go do her thing. 🙂

Of course,  Catch wasn’t through for the morning. He changed tactics and caught several sacalait (crappie), including this pretty fish.

So much for our day in Lake Valentine. Our tally was 7 bass each and four sacalait for Catch.