I got a chance to fish for the first time, post Hurricane Ida this morning. To say the hurricane was catastrophic is an understatement. The national media has just been focused on New Orleans. There are places in rural South Louisiana that will take many years to repair. Some businesses that have been open for 70 plus years were destroyed and will not be rebuilt. We continue to pray for those who have been effected. Personally, my house didn’t receive any damage, except for 150 feet of downed fence. My parents in Thibodaux lost nearly all the shingles on their roof but suffered no major damage. Many, if not most of able-bodied South Louisianans have been helping neighbors, friends, and family. I made it down to the epicenter of the eye-wall, Port Forcheon, to help a friend repair some plumbing on his camp. While his camp suffered major damage, he was fortunate and he will be able to rebuild. Here are some pictures from some of the damage there:

After spending a day down there, I knew I needed to get on the water, but I wasn’t going to be heading south for a while. So, I decided to do some much needed, hurricane recovery at my peaceful, happy place. My view this morning was much more peaceful, as you can see in the next photo. I watched a flock of ten teal buzz over the water as I unloaded my kayak.

The fishing was great! I caught 10 bass and lost about a handful as well. They were all caught on a frog-colored deer hair popper, tied on a size 2 hook. This is one of my smaller deer hair bugs tied with rubber skirt legs. The first bass of the morning

After the sun had come up pretty good and the topwater bite slowed down, I switched to a baitfish streamer pattern. I had fished with it for about a half hour without a bite. Then I received a text with a couple pictures from my daughter, who is in Orlando with my wife, my son-in-law and the three grandkids. I put my rod down to look at the photo. When I put my phone away and I picked up my rod, I realized I had a fish on. I never got to see it. I tried to set the hook in it and it doubled my rod over. The fish ran underneath my kayak and then it promptly got off. Oh well… that’s fishing. If you’ve followed this blog before, you have read that my friend who owns this lake wants me to harvest fish under 15 inches. So, I took home six for supper.

Please pray for those who’ve lost so much to this hurricane. Everyone I spoke to yesterday said they would rebuild. They will build it stronger. It seems after each hurricane, we learn more about how to effectively build to withstand strong winds from a major hurricane. I just hope I don’t have to see another one like this one in my lifetime.

Until then, tight loops and tight lines!

With that first blast of cooler air…well in South Louisiana, cooler means lows in the upper 50s, the water temperatures start to fall and that means the fish can remain in the shallows a little longer. During the summer, when I fished my local neighborhood lakes, most of the hits I received on flies were within the first half hour of sunrise. Now, I can actually count on getting action for a couple hours before things slow down. Another bonus is, I can expect to get on the water at 6:30 instead of 5:30 so I can get a bit more sleep 🙂

I slipped my kayak into the lake at around 6:30 and I enjoyed a beautiful awakening of wood ducks, Canada geese, a playful nutria, great white egrets, and hungry kingfishers. Oh, did I mention that the big bass were hungry too? I tied on a small dalhberg diver and I picked up my first bass with 5 minutes of being on the water. It was small but it was a start.

I kind of thought to myself, “Maybe it’s only going to be small fish today. I’ll take it because it was such a beautiful morning to be out on the water.” Then, I had a huge blowup and missed fish. I tell students in my fly fishing club that one of advantages of fishing with a fly rod is the speed at which I can get my fly back into the strike zone after a miss. I lifted my fly out the water and I was back in the “zone” within seconds. A couple of strips and this time my hook found home. I could tell this one wasn’t a little one and after a few minutes of back and forth, I was able to land this nice fish.

The morning continued with action right up against the bank.

Around 8:30, I decided to see if the bream would bite and I managed a few small ones at first,

And then I hooked this pretty red-ear.

What a great way to spend a couple hours in the neighborhood lake. I’m already looking forward to next weekend. 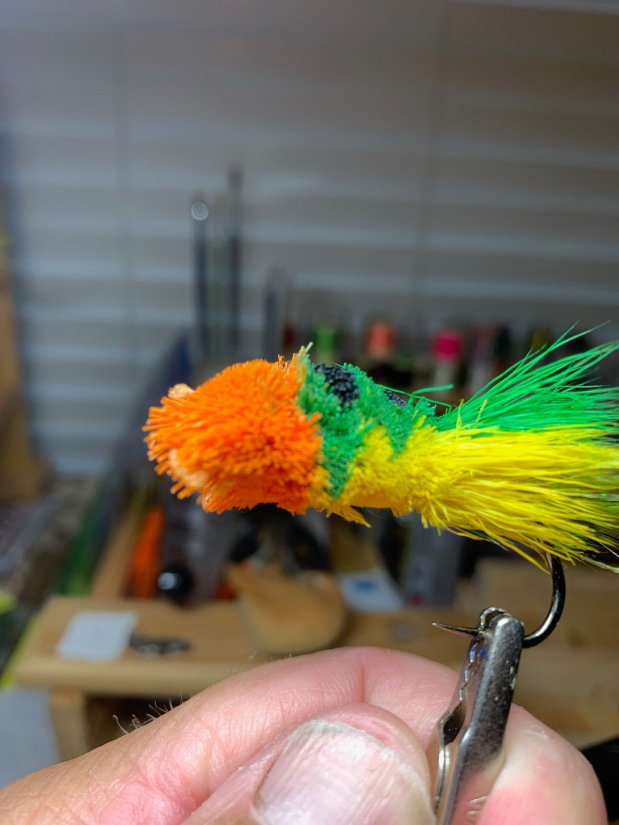 So here’s what happens to a deer hair popper (fire tiger) when you land 24 bass on it in one morning. 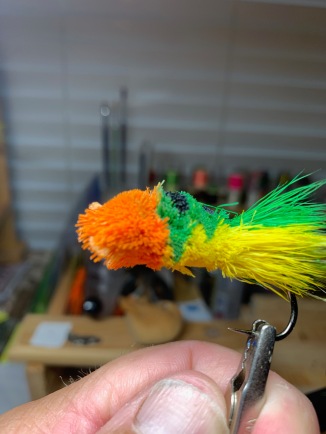 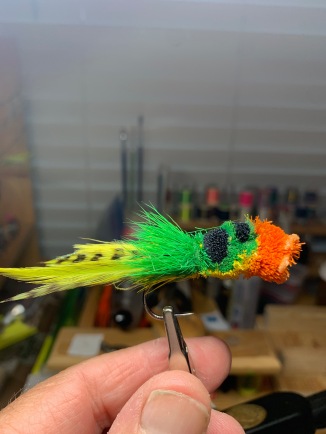 Pretty nasty, right?  I landed 24 bass on this one fly this morning and I missed another half dozen or so on it as well. In fact, early on, I had a big mama suck it down and she broke my tippet. I found the fly, intact, floating about 20 feet from where I lost her and I tied the popper back on. I kept count because I wanted to show just how durable these poppers are.

Not a bad fish story, right? But here’s where it gets interesting. I took the fly home, did some more trimming, added some more fabric mender glue, added eyes, and here’s what I got.. 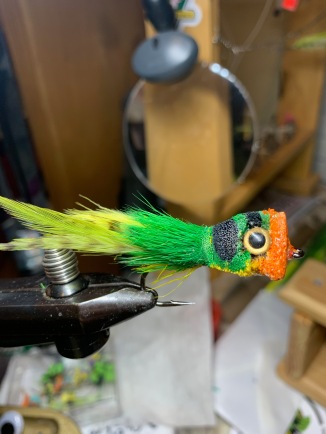 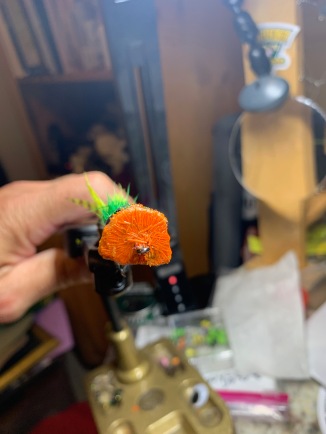 Not bad, if I must say so myself. All it took was about 3 minutes of work and I’ll have another popper ready to catch at least another dozen bass this week. Yes, I’m on Spring Break. 🙂  Let’s see you do that with a traditional popper. You’ll have to probably repaint the body, add eyes and epoxy the whole thing. Not that it can’t be done, but this took me all of three minutes to do.

Well, I said I caught 24 bass on that popper this morning. While, I won’t bore your with 24 pictures of bass, I will post a few here: 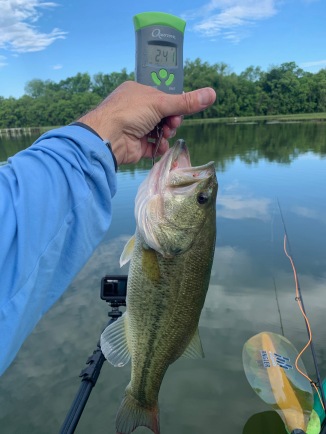 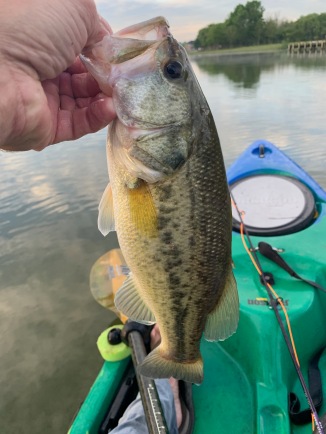 Most of them were in the 11-12 inch range, but I had about 6 that were 15 inches or larger. Most were caught on the Fire Tiger popper. I caught a few on a Tokyo Spider and a few on a shad baitfish fly. The good news is spring break has just begun. The bad news is, the wind will probably keep me from fishing my beloved South Louisiana marsh this week. Oh, well…there are plenty bass, bream, and sacalait that will want to play 🙂

Fly FIshing Adventures Based Out of Louisiana