Lately I’ve been really tying some pretty deer hair poppers so I thought I would feature that fly. I prepared a few in different stages of completion so I could demonstrate from start to finish how I tie these flies. Here’s an example of one of my fire tiger poppers.

I’ve tied several variations on that fly including shad colored ones, frog poppers, and even some salt water versions. Additionally, I was also asked to give a presentation on fishing from a kayak with an up-and-coming rock star in the fly fishing world, Sarah Giles.  Believe it or not, Sarah catches a lot of redfish from a ten foot, sit-in kayak with a fly rod. She gave the talk on salt water fishing and I added my two cents from my experience as a freshwater fisherman. I thought it was quite informative. We gave the basics of why fish from a kayak, how to rig your kayak (including milk crates, rod holders, anchor pulleys, “the pool noodle is your friend” tip), and how to cast while sitting or standing from your kayak. Oh, and we also gave the all-important point to WEAR YOUR PFD at all times!!

When it came to explaining why we fish from this minimalist perspective, Sarah gave the best reason, in my opinion, of why we fish from a kayak. I’ll paraphrase and embellish it a little, but it went something like this:

There’s nothing like the feeling you get when you stalk your prey; in this case, a big redfish and you’re at its level. It’s that stealthy approach that gets you sometimes within 10 feet of Mr. Redfish. You and he make eye contact with each other as you watch him flare his gills and smash your fly. Most of the time, this fly is no bigger than your thumbnail! Then you strip set your hook and spend several minutes (sometimes in excess of 20-30) to coax the spot-tailed beast into your landing net. Once you’ve successfully done that, you get to admire your adversary up close, snap a picture or two, and release it unharmed back into the marsh to continue to do its thing.

Well, after that explanation, I’m sure there will be several people going to their nearest outfitter to purchase a kayak and experience that thrill that we all enjoy so much! Remember the participants 🙂

At the end of the day, we headed to Catch’s house in Boyce and we enjoyed a fabulous home-cooked gumbo prepared by Catch’s wife, who by the way, is a pretty accomplished fly fisher-lady herself.

The next morning we were itching to get on the water to do some fishing because we were enjoying some of the warmest weather we’ve had in over a month. Because Sarah is in the market for a new sit-on-top kayak, she fished out of Catch’s 14-foot Native. Catch and I fished from his canoe. Even though the temperature of the air got into the upper 60’s, the water temperature was still in the lower 40’s. We didn’t know if the fish would cooperate. We were pleasantly surprised as we caught 8 nice crappie (also known as white perch or sacalait) and Catch caught a couple of red-eared sunfish (shell crackers, lake runners, or chinquapin). The fish all ate some variation of a fluff butt. I’ve attached a couple of pictures. By the way, Sarah later told us that this was her first sacalait on the fly rod. We may have created a monster 🙂 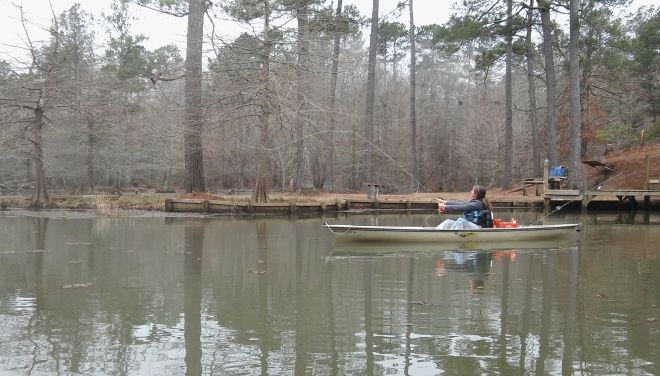 Nice tight loop there from a sitting position. 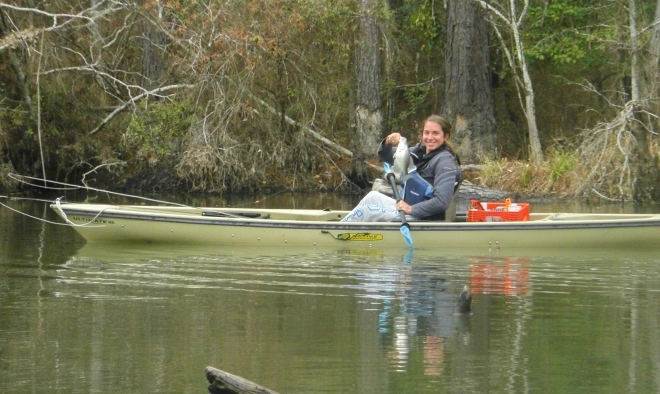 Sarah was all smiles with her first two crappie on the fly rod.

I managed to catch a few in the front of the canoe too.

Check back here for a post in about three weeks when the water warms up a little and the fish really turn on. I plan on making a trip back to CENLA during our Mardi Gras break!

I’ve been asked by a few other kayakers about my camera setup.

I use two mounts. My old one (second pic) is for my kodak playsport. My new one is for my GoPro Hero 2
So here’s where I got the idea for the old one:
http://www.sportfishingmag.com/gallery/2012/03/build-your-own-gopro-mounting-system
The new one is designed from this: http://www.youtube.com/watch?v=e7OVHtWeaQA
Both setups have their own advantages. The old setup swings easily and I find it’s easy to get pictures of me holding fish. I can set the camera to go off and swing the PVC around with my foot to get ready for the picture. However, I always worry about the dang thing falling in the water. The newest mount (Targus) is somewhat difficult to pull out of the Scotty mount and adjust. I have to be careful not to over extend myself and fall out my yak. However, once I have it setup and locked, it’s not going anywhere and won’t fall out the boat. I still use pool noodle to make double sure I don’t lose it. GoPros are expensive. 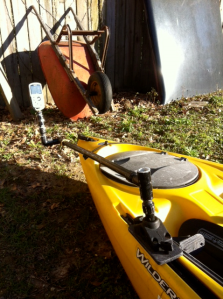